We're open 24/7 and ready to help you during COVID-19 with Sanitization Solutions.

Published by Jennifer on May 25, 2018 in category: Water Damage Restoration

Baltimoreons are still reeling from the impact of a huge storm system that caused flooding, road closures and water damage all throughout Maryland. 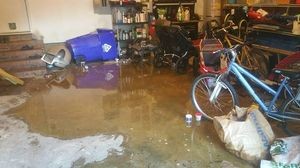 The storm overwhelmed many bodies of water throughout the state, including the Potomac River, the St. Mary’s River, the Monocacy River, and Carroll Creek. Officials advised people to stay away from these rivers, creeks, and streams as they hit flood stage.

Most parts of the city saw at least 3 inches of rain, with some areas getting close to 7 inches. Flood warnings were issued as the rain continued to overflow these rivers, causing roads to be closed and the MARC train to limit its service over the weekend.

A previous storm had already saturated the ground, making the soil more likely to start flash flooding in the area and carry debris into the roads. The river banks were also high from the increased rainfall, allowing them to quickly flood the city’s drainage and sewer systems.

The storm damage was severe enough for the Mayor of Frederick to declare a state of emergency. Living in an area that is prone to flooding can be dangerous, so it is important to always heed the warnings that are put into place when intense storms hit the community.

It is important that property owners understand the risks that come with living near bodies of water such as the Potomac and Monocracy. When rivers and streams hit flood stage and the drainage system is not able to contain the overflow, then residents are put in a situation where their homes and businesses are at a great risk of becoming flooded.

Even if you are prepared, this type of flooding has the potential to be extreme, causing your basement to flood and creating water damage throughout the property. Your ability to travel may also be restricted due to roads being flooded or by blockage from debris.

Another important thing to note is the way your insurance provider will handle claims for water damage caused by an overflowing river. Standard homeowner’s insurance policies do not cover damage caused by bodies of water, which can be quite disconcerting if you find yourself in a situation involving one.

In order to be completely covered, you need to purchase a separate flood insurance policy that will cover any instances of flooding caused by outside sources.

The storm in Baltimore pushed the city’s sewage system to its limits. The residents were told to conserve water in order to lessen the strain that was being put on the wastewater treatment plant. There were also warnings issues to stay away from the area where Carroll Creek and Monocacy River meet because their confluence could contribute to a sewage overflow.

Thunderstorms brought heavy rains that were overburdening the plant to the point of overflow, which contributed to the flooding throughout the area.

It might be surprising to find out that a city’s sewage system could be inundated with water to the point of an overflow, considering its sheer size, but it is completely possible and actually quite common. When the drainage system is flooded, the water in the sewage system as nowhere to go. This causes pressure to build up in the plumbing, which can lead to pipe bursts and breaks.

If water conservation orders are made, then you can help keep the floodwaters at bay by refraining from washing your dishes or running your washing machine. Simply try to limit your output of water during the storm and you will reduce the risk of an overflow from occurring.